As stipulated by the current legislation, our distillery is independent of our winery’s remaining facilities. Temperature and humidity conditions on the premises are kept fixed to ensure the final product enjoys excellent quality. The distillery is outfitted with fermentation and storage tanks where our raw material is processed and stored respectively. It is also equipped with an Italian, 1,000lt alembic still which is as aesthetically beautiful as it is technologically sophisticated. Equipment also includes collection and mixing tanks where the distillates from different varieties are stored as they wait to be mixed and attenuated. Our bottling line is the final stage in the production process of our “Tsipouro ton Filon” (the friends’ brandy). The oak casks used in the production of matured vintage Tsipouro complete our distillery’s profile.

Out of all the varietals we use for wine production at our winery, we select the most aromatic pomace, the one which will release the characteristic aromas our customers have come to expect from our “Tsipouro ton Filon” (the friends’ brandy). Pomace is the residue left after the grapes have been pressed and most of the juice intended for wine has been removed. Pomace contains a very small juice percentage, pips (seeds), and skins. As raw material, we also use a very small percentage of fine lees that are clean and aromatic. After alcoholic fermentation, fining, and clarification have been completed, decayed lees accumulate at the bottom of the tanks. They contain 2-3% of wine, a small percentage of wort solids, yeast cells, and fermentation by-products. 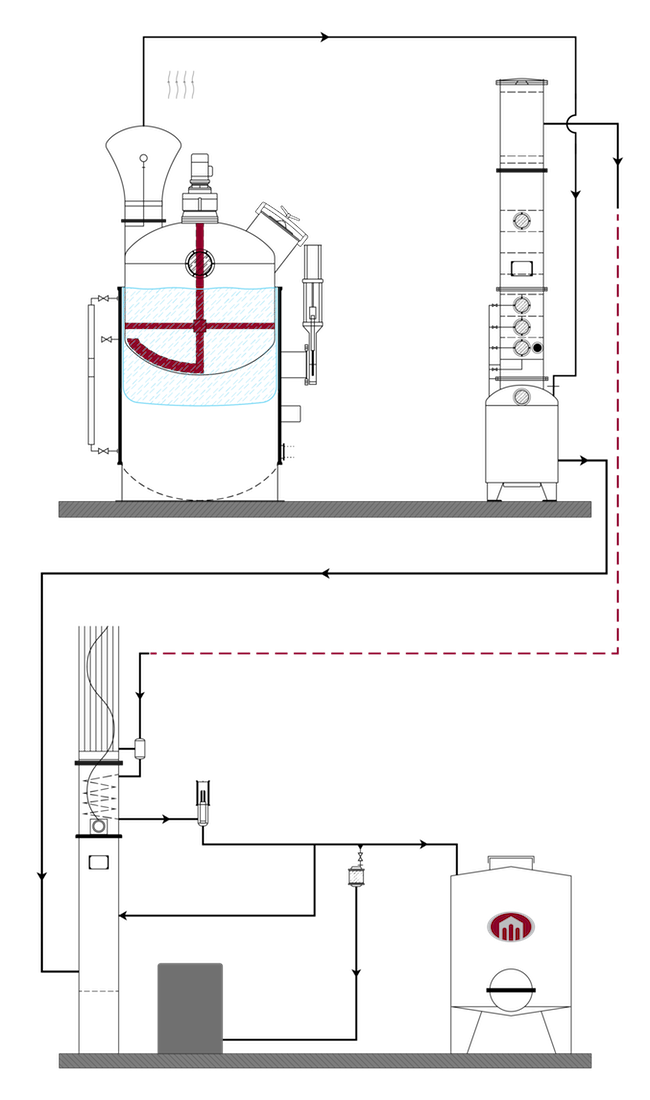 The pomace enters the distiller through the commodity-supply point. Inside, the stirrer stirs the marc continuously so that it does not accumulate on the bottom. The distillation vessel is heated by means of a heated water bath (bain-marie) so as to avoid extreme changes in temperature over the range of 95-100°C and to prevent the pomace from overheating and releasing undesirable smells in the tsipouro being crafted. For the operation of the water bath, we power the burner with LPG. While on their way, distilling vapors hit the first-fraction bulb and are transferred to the rectification column. The column includes a distillation vessel that collects the vapors; and a rectificator with distillation plates where the distillate increases its alcohol content, thus leaving behind the fractions that are heavier. At that point, the distillate is completely rid of undesirable ingredients. As a result, the process of repeated distillations is well avoided. Next, the distillate reaches the cooling chamber where the “heart” (middle condensate), which goes towards making our tsipouro, becomes separated from the distillate. The “tails” (last condensate) are unwanted components and are refluxed and deposited in a collection container. Next, the distillate’s alcoholic strength is checked by a special system whose task is followed by the election apparatus which separates our precious distillate from the “head” (first condensate) which is channeled to the disposal container. Then, the distillate is directed to collection tanks whose number corresponds to the vine varieties the distillate is made from: Muscat, Agiorgitiko, and Savatiano. The final distillate’s alcohol measures at 75% vol. and goes into the containers where the final product is mixed and attenuated. While at that stage, the tsipouro undergoes certain other procedures so that desired alcohol (40% vol) is obtained, together with the desired sensory components. Last, our distillate reaches the cooling container where it is stored. The containers are then sealed and fully monitored by the competent authorities.